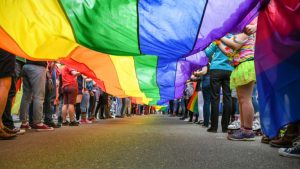 This weekend saw the 51st anniversary of the Stonewall uprising and the LGBT+ community celebrated Global Pride on-line . Given recent events our LGBT Officer Tamsila & Branch Secretary Christian take a look at the beginnings of Pride, the LGBT+ movement and Queer People of Colour.

On 28 June 1969 after police had raided the Stonewall Inn, New York City, riots ensued and ran over several nights. It’s often forgotten that the people at the forefront of this uprising were Queer People of Colour, including trans people, drag queens & drag kings with Sylvia Rivera and Marsha P. Johnson being the most notable. 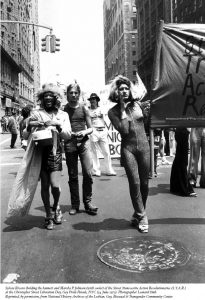 These riots were the tipping point for the Gay Liberation Movement, not only in the United States, but here in the UK too. The Gay Liberation Front(GLF) began in London in 1970 and groups were set up across the country. The GLF, along with other splinter groups went on to organise the first UK Pride march in 1972. It was five years later in 1977 that Bristol held its first Pride march. Bristol Pride has grown over recent years to be one of the biggest Pride festivals in the country and this year will be taking place on-line from 1 – 11 September.

The Stonewall uprising took place in the context of broader civil rights movements. The Revolutionary People’s Constitutional Convention in 1970 was a key moment in which activists from Black Power, feminist and gay liberation movements came together, saw common cause and learned from each other.

Fifty one years after the uprising and there’s lots for us to celebrate. The LGBT+ movement has won employment rights, parenting rights, partnership and marriage rights, an equal age of consent… but there’s also a lot more work that needs to be done. Whilst  the fight for equality and justice must continue until everyone can be accepted for who they are – without exception.

Ben O’Keefe, a trans activist and former senior aide to Senator. Elizabeth Warren stated,  “Allyship is language, and being a co-conspirator is about doing the work”. In these times it’s not enough to say we’re not racist, we have to take action and be anti-racist.

In 2017, UNISON’s National Black Member’s Conference passed a motion in support of Black Lives Matter, in solidarity to oppose police brutality and murder. If you’re a member affected by these issues, UWE UNISON is here to support you, so please get in touch.

Some resources for our time:

*Out of place: Gay Imperialism: Gender and Sexuality Discourse in the ‘War on Terror‘